Which is the Best Android App Development Framework for Your Project in 2022? 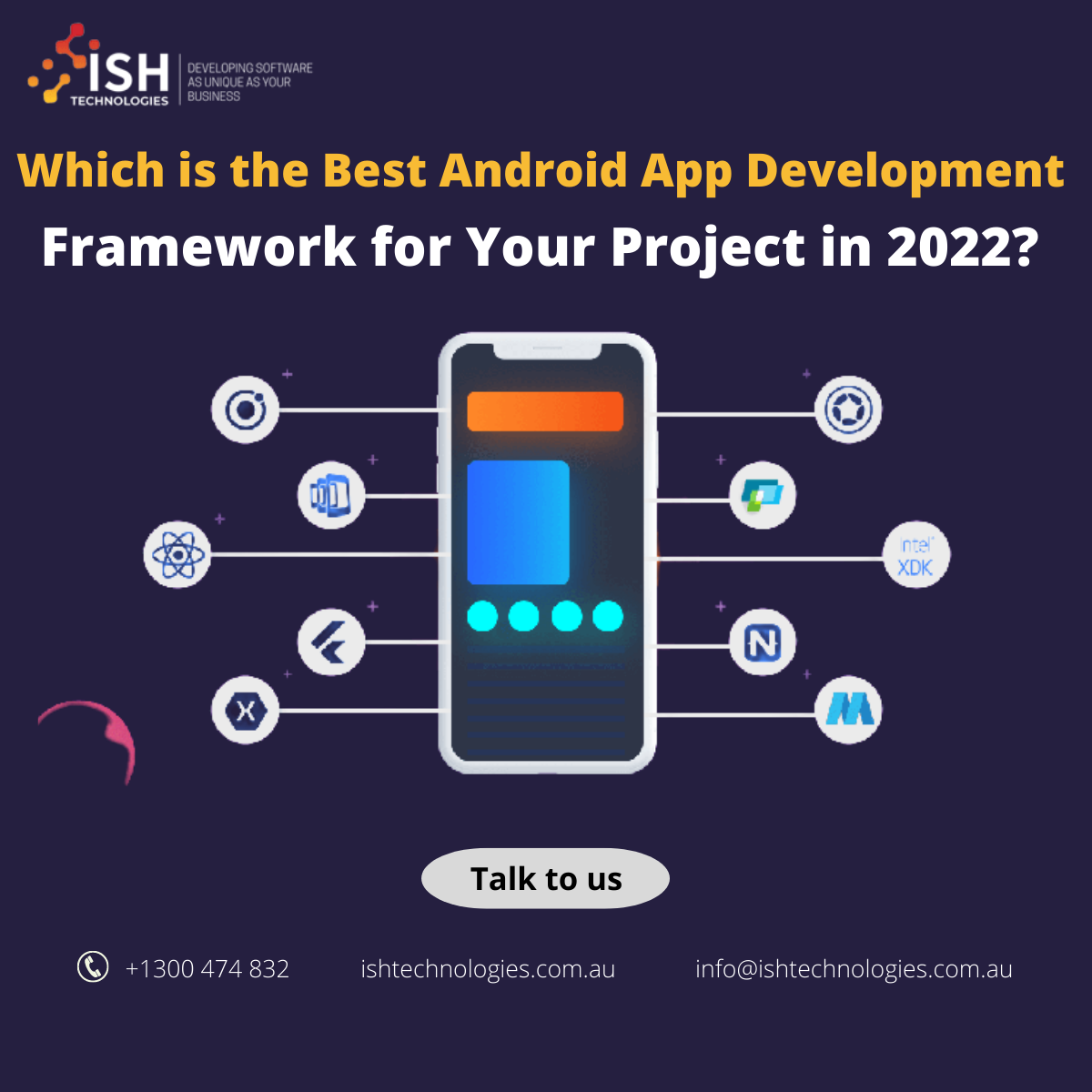 This blog describes the in-depth information about each Android framework and will help you choose the best framework for your app’s development in 2022.

Flutter is the most recent mobile app development SDK which Google developed to build mobile, web, and desktop applications. This is an open-source framework for building cross-platform apps by its unique way of developing native-like applications. It consists of highly customizable features that help faster development of cross-platform apps in a native style performance. This framework is written in Dart language and uses a single codebase, therefore, it is highly reliable for the quick development of user-friendly apps. The Flutter framework benefits heavily from a 2D rendering engine called Skia. The visuals that are generated using Skia look like the Material Design and Cupertino widgets. Below are some of the elegant features of Flutter:

It has a solid testing framework for performing UI, unit, and functionality tests.

Support for both iOS and Android.

Very good reload feature that enables seamless testing without having to restart the application.

React Native is an open-source cross-platform app development framework developed by Facebook and released in 2015. This framework for mobile app development has become a likeable aspect for developers due to its abilities in fast development, and implementation with support to both iOS apps and Android apps. React Native relies on React, a great JS library, to build applications on both the operating system. This cross-platform characteristic enables developers to write the code only once and execute it elsewhere. This makes the Android mobile app development process relatively quick and cost-effective.

Generally, the developers seem to face difficulties such as the Codebase differences, Iteration Period, and Imperative programming. React Native provides the best solution to all those problems, making it a leader among the new Android app development frameworks.

Other key features are:

It brags about the hot-reload feature, which allows the developers to update files without interrupting the app's current state.

Xamarin is owned by Microsoft, and it stands unique among the cross-platform app development frameworks for Android and iOS since it takes only a few lines of code for development. As they use C# language, the result is a faster mode of coding with minimal time. There is also a viable option to transfer the scripts to multiple systems like Windows or macOS. Generally, there is a feeling that if you stress about developing applications in a shorter period, then you may be sacrificing the overall quality of the product. But Xamarin offers the best quality coupled with native-like performance. The framework consists of an intermediate layer that manages the link between standard and core system codes. Xamarin is aided by an active community that offers a better use of APIs, backends, components, and tools. Moreover, the combination of Visual Studio IDE, and Xamarin helps gain better efficiency and output. Exclusive features of Xamarin include:

Xamarin brags an advanced toolset for developers to work with shared code written in C# or XAML.

Code-sharing feature cuts down the coding time and number of bugs for developers.

Ionic, released in 2012, is one of the leading open-source frameworks certified by MIT in developing progressive Web apps and cross-platform apps for both Android and iOS platforms. This framework enables developers to build modern hybrid apps using HTML5, CSS3, and JavaScript across multiple platforms. Moreover, you have the lightning version named Ionic studio that is more robust and can be installed locally to access a smooth visual development setting. The ionic framework makes its mark in the segment due to its unique features for development. Exciting aspects of Ionic include:

It hosts a simple CLI, enabling access to emulators, live load, logging, and other interesting features.

Ionic framework integrates quite easily with other libraries such as AngularJS and Cordova.

Cordova’s plugins enhance the functionality of the framework through various components such as a camera, and GPS.

jQuery Mobile greatly reduces the workload of developers. This means, a developer has to write the code only once and the development framework will execute it on virtually every other platform. Some more features of jQuery Mobile:

It is easily compatible with other mobile app frameworks and platforms like PhoneGap and Worklight.

Apache Cordova previously known as PhoneGap is a highly extensive and developer-favourite mobile app development framework for cross-platform applications. Utilizing HTML5, CSS3, and JavaScript, Cordova lets developers give a native-like experience in the final product by using features like a camera, GPS, and several others. This framework is popular for faster development with the addition of third party app management tools.

Besides Android, other operating systems can also leverage Cordova for mobile app development. Exclusive features of Apache Cordova include:

This makes the integration of Cordova’s code into larger native apps achievable.

This framework enables developers to work without hardware-specific limitations.

Corona SDK framework was introduced in 2009. It is a free-to-use framework for Android with a simple syntax. Corona SDK is a highly advanced 2D mobile development platform for both iOS and Android.

This framework is mainly popular for Android game development. But, developers also use it as a common framework for Android app development. Corona SDK is available for both Windows and MAC OS and uses only a single code base that can build apps and games for mobile and desktop.

Faster development process, it is 10 times faster than other Android frameworks.

It employs Lua for its app backend framework. Lua is a multi-model programming language that is easy to learn, lightweight, and robust in nature.

It consists of many built-in feature-rich APIs, many plugins, and a dynamic advertising platform for the developers.

Real-time testing is easy and it also supports native UI.

Some key features of Sencha Touch are:

Richness in fluid animations and smooth scrolling to the applications.

Businesses report that it has a high degree of compatibility, responsive touch features, and swift execution.

This special android framework is based on HTML and supports a codeless UI. Hence a person need not learn coding to use this framework for Android app development.

TheAppBuilder is appropriate for creating information-based Android apps. Its drag-and-drop feature enables you to assemble the apps quickly and easily.

Some unique features of TheAppBuilder are:

Comes with built-in blocks that include functionalities such as content updates, feedback, polls, push notifications, and much more.

NativeScript relies on JavaScript, TypeScript, and Vue.js for creating applications and sharing codes across platforms.

Some important features of this app development framework are:

It saves time and money in the app development process.

This will make all Android and iOS APIs fully accessible for the developers.

This framework offers a chance to easily reuse Android SDKs and CocoaPods and search for free app samples, plugins, and templates.

SproutCore is an open-source JavaScript framework for Android developed by Apple. This HTML5-powered framework is utilised in creating super-fast applications with well-defined features.

Generally, developers use SproutCore for its clear MVC design, which provides performance optimization and scalability.

Some key features of this framework are:

This Android framework includes an extensive set of more than 50,000 tools.

These tools are well-suited for creating desktop-like applications in a browser, including routing, UI components, testing, and deployment tools.

Reusable application code and well-thought-out business logic, the development framework has become one of the best in its field.

Are you looking for a mobile app development platform that offers simple and self-making ways to develop customised applications? Then SwiftiC is the right choice that enables developers to include the latest online aspects for app development. This is a unique app development platform in terms of flexibility, sublime user experience, and up-front approaches. This app development framework associates all the advanced technological updates to benefit the user, making them stay connected with your product. It has a combined control panel that enables the developers to develop, deploy and update the product from one place with a simple solution.

Some of the exclusive features of this framework include:

This open-source app development framework enables developers to create native applications using a single JavaScript codebase. As a result, Appcelerator Titanium had to make it to the list of new Android SDKs for mobile app development.

Some of the key features of this app development framework are:

It has a unique feature. Developers can create multi-platform apps by deploying around 60%-90% of the existing code.

Android apps built with this framework enjoy the advantage of using hardware-specific features.